Modern cacao farm design is in a bit of flux these days as agronomists and technicians experiment with ways to increase productivity on a given amount of land. Some of this experimentation is with the genetic material selected - e.g., whether to plant high-yield, disease resistant varieties versus lower-yielding varieties with fine-flavor characteristics.

Another aspect of this experimentation is with the design of the farm itself - how densely the trees are planted, the shape of the spacing (e.g., square or triangular), the amount of shade and how it is oriented, and more.

On the final day of La Ruta del Cacao, on an experimental farm located in Tingo Maria, I saw a farm unlike any other I - or anyone else in our group - had ever seen. Or heard of. Or thought possible.

It was a farm producing over 3,800kg/Ha of dried cacao fino beans. This compares with the highest output of high-yielding/low-flavor varieties such as CCN-51.

The result of 25 years work by agronomist Mendis Paredes, the farm (shown in the image at the top of the story) is an example of what is known as high–input/high-output farming.

Most cacao farms in the world are planted at a density on the close order of 1000 trees her Ha (hectare, 1000 sq meters/quadrados, or about 2.5 acres) and yield anywhere between 5-600kg to 1000kg per hectare. The low end of the spectrum is very typical for farms around the world that practice what is called low-input farming: the farmer does not spend much time maintaining the trees (pruning, weeding, removing damaged and diseased pods and material, applying fertilizer and/or pesticides/herbicides) and so does not get a lot of production. But the additional income that might be earned by working harder is not offset by the amount of work required.

On the farm we saw the planting density is extremely high: 5000 trees per hectare. The planting pattern rows one meter on center with rows 2 meters apart. The trees themselves are also unusually shaped. They are produced using micro-insertion grafting, a relatively new technique that produces a tree with a single trunk. The trees are pruned to a height of two meters and branches are aggressively trimmed, so all pod production is on the trunk. Ing. Paredes has determined the optimum number of leaves required to produce a healthy and mature pod, and so the trees are pruned to meet this optimum ratio. The kind of look like the cacao equivalent of a lollipop.

Shade (sombre) is about 45% and the cacao and shade trees, mostly capirona and boloina, are aligned with the prevailing winds and path of the sun. This orientation funnels any breezes to reduce humidity and aid in pollination as well as provide intervals of shade and sun over the course of the day. A welcome by-product of this approach to farm design is that it supports a high level of biodiversity with respect to birds and other species. (The plot below is planted at a more conventional 2x3 meter density and is pruned appropriately for the density.) 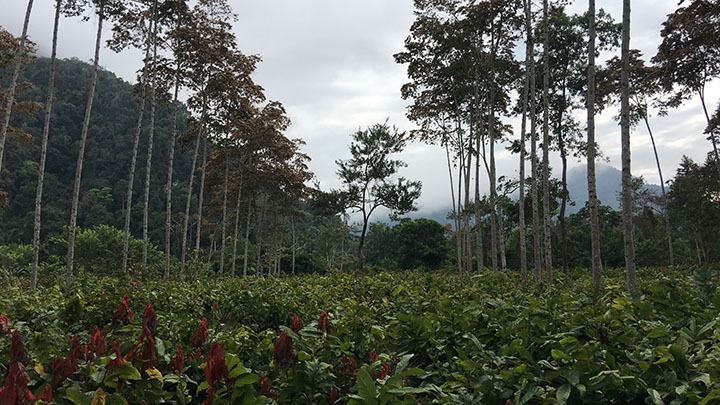 Fertilization is a must in this kind of system (and probably irrigation in many locations). In this plan, trees are fertilized six times per year. Once is an application on the roots and the other is foliar (sprayed on the leaves). The fertilizers, which are organic, are created on the farm, and contain a list of ingredients that includes leche condensada (condensed milk!) and juice from the pulp. 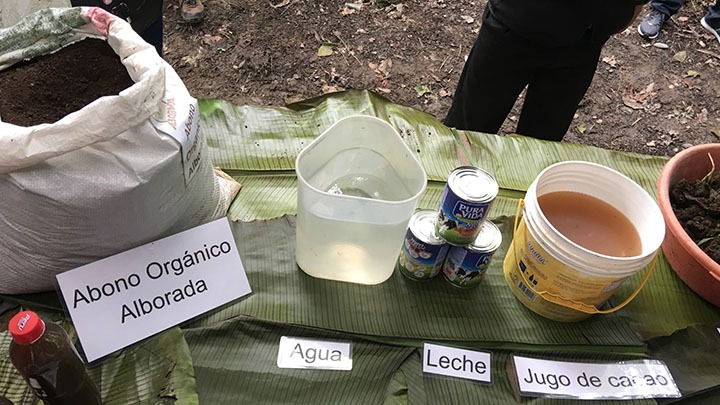 This method is expensive and labor intensive during the first three years as the three are establishing themselves. Once established, the farm is visited every two weeks throughout the year to remove any ripe fruit, diseased or infectious material, and any non-producing branches (chupons).

Once in production, however, labor costs plummet dramatically as the farmer is production roughly 1000kg/dry per 1000 trees. This means that a 1Ha farm of cacao fino can produce more than a CCN-51 farm, and as much as 10Ha of farm planted and managed more conventionally. The farmer is able to make 5x the income working a much smaller farm. Ing. Paredes has calculated the cost of production for an established farm according to this protocol of about s/- 2 (two Soles, or about US$0.75) per kilo dry. The local market price is about s/- 6 per kilo.

And this is using varieties that are considered to be fine flavor, which, in the international market, would fetch considerably more than that.

There are unknowns and risks in this kind of high-density farming.

Another, and perhaps more important one given the history of coca production in the area, is what does a farmer do on the rest of their land? If the farmer can make US$10,000 per year for the cacao from a single Ha (about 5x the average for other farmers in the region) selling into the local market, then what do they plant on the rest of their farm? Coca? Or a crop that requires more work for a lower return?

Nonetheless, for a motivated farmer, this is an extremely attractive proposition. It has the potential to deliver levels of productivity to deliver cacao fino varieties to the market at a very attractive price, and reduce the pressure to cut down forest to increase the area planted. It should be possible (and relatively easy) to renovate farms in situ, which is also very attractive. Given the changes to production in West Africa that can be attributed to climate change, this approach to cacao farming, if it can be replicated, scaled, and maintain high productivity over the long run, will be a very good thing for chocolate lovers worldwide, and for the farmers and farm families that work hard to grow the cocoa chocolate is made from.

Really cool to get an in-depth look at this!

Seeds from one of the porcelanas:

This is a photo of some of the porcelana types grown on the experimental farm. In the middle is some chocolate mass (or liquor - unsweetened) made from the seeds. The aroma is amazing.