Hidden Persuaders in Cocoa and Chocolate

The last time I was in Cologne, Germany was in September 1986 during my pre–ChocolateLife.

I had traveled to Cologne to work Photokina – the largest fair for photography in the world at a time when affordable digital tools for image editing were just starting to become widely available. The introduction of the Macintosh IIc and the subsequent introduction of affordable full–color (24-bit) graphics cards and software tools including Adobe’s Photoshop were still in the future (1987 to be precise). That perfect storm of hardware and software, coupled with affordable high–quality portable digital cameras (and more recently, social media), has completely transformed photography as we know it. Within a single generation.

So, I was happy to accept an invitation to return to Cologne in late January to attend ISM, 32 years after my first and only visit.

For those who don’t know of it, ISM is the largest expo for sweets and snacks in the world, attracting major global brands but with a focus on European brands and markets. Most of the exhibiting companies were consumer brands looking to connect with existing customers and generate new business.

My host for the trip, again, was Barry–Callebaut. As at the Ruby launch in China last September, I was one of a small group of global influencers in chocolate invited to attend the launch, this time of a new tool for communicating about flavor in chocolate. The launch event took place on the Barry–Callebaut stand on Sunday evening after the close of the show and consisted of two parts, an introduction to the project followed by dinner. The excellent dinner, accompanying cocktails, and musical entertainment were provided by the same team that served us in Shanghai.

In coffee, beer, and other beverages and foods, there are codified, systematized, and agreed-upon vocabularies for talking about flavor. One example of these is the flavor wheel recently introduced by the Specialty Coffee Association of America (SCAA).

In chocolate, there is no one widely accepted vocabulary with an accompanying visualization for communicating about flavor in chocolate.

There are many informal vocabularies and visualizations in chocolate. A quick Google image search will return a wide variety of wheels and graphs that share some common descriptors. However there are enough differences between them to make comparing the same chocolate using two different systems difficult if not impossible.

One of the most evolved and widely–used vocabularies is the one created for the International Cocoa Awards/Cocoa of Excellence. Through the 2015 round they relied on spider graphs to visualize flavor, but beginning with the 2015 round and in the 2017 round they used a visualization based on radial pie charts. 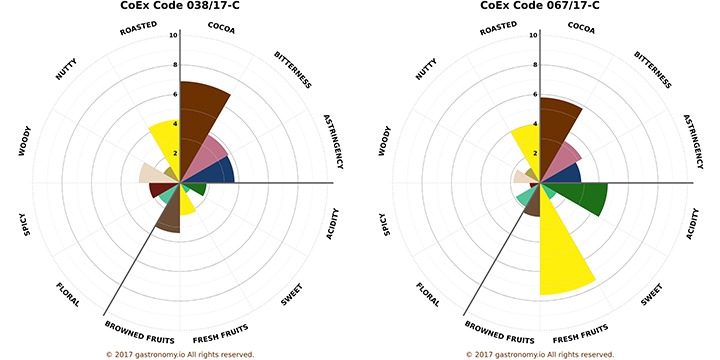 This format is vastly superior to spider graphs in part because it makes if possible to directly visually compare two or more graphs and get an immediate sense of how cocoa liquors and chocolates are different or the same. [Disclaimer – I am the one who lead the development of these graphs for Cocoa of Excellence.] These graphs have also been adopted by Lutheran World Relief for their Central American Flavor Map project and are going to be the basis for communicating about bean flavor for the upcoming live cocoa auction on the floor of the Beurs van Berlage in Amsterdam during Chocoa 2018. This system relies on trained tasters whose palates are calibrated.

For the past several years, the organizers of the International Chocolate Awards, who are also the founders of the International Institute of Cocoa and Chocolate Tasting, have been working on a statistically–based system that is based on the physiology of tasting that also maps to actual chemistry of flavor. This is an interesting approach but I have questions about the underlying statistics, among them how many samples are required to reach a specific confidence level and deviation. As a design student (graduated RISD) who has gone to school on the work of Edward Tufte (co-author of the seminal The Visual Display of Quantitative Information) I also think there is work that needs to be done to make the visualization they created more effective at communicating.

There are also some really interesting attempts to develop more intuitive/emotive systems for communicating about chocolate flavors. One interesting one to take a look at is the one developed by Hazel Lee in the UK that connects flavor impressions with colours.

The title of this new work was inspired by a 1957 book of the same name written by Vance Packard about subliminal advertising techniques. 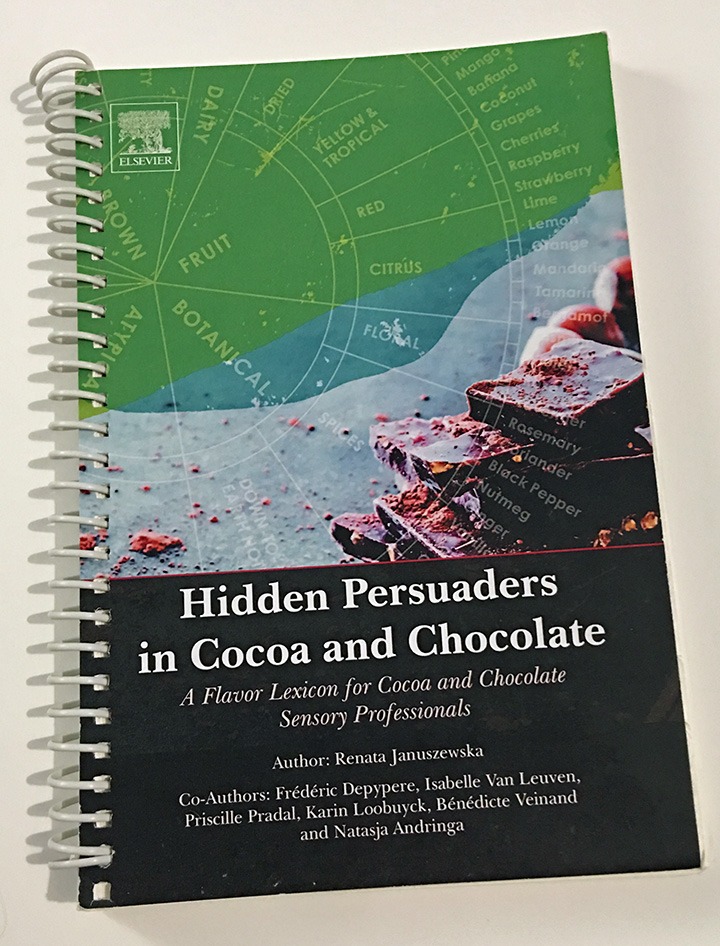 Hidden Persuaders in Cocoa and Chocolate: A Flavor Lexicon for Cocoa and Chocolate Sensory Professionals [to be published in Q1 2018 by an imprint of Reed Elsevier] is another attempt to create a system for communicating about flavor, with an attempt to describe why we react to flavors in chocolate the way we do. Most people are not aware that flavors can evoke emotional connections which help determine whether we like something are not. Because these connections and evocations happen at an unconscious level, they are hidden persuaders.

Barry–Callebaut enlisted the aid of flavor/fragrance house Givaudan to map flavors and sensory impressions to the emotions that are commonly evoked. The addition of this emotional, dimension has the potential to enhance not only our understanding of why we like what were tasting but also the way recipes are developed to evoke specific reactions. 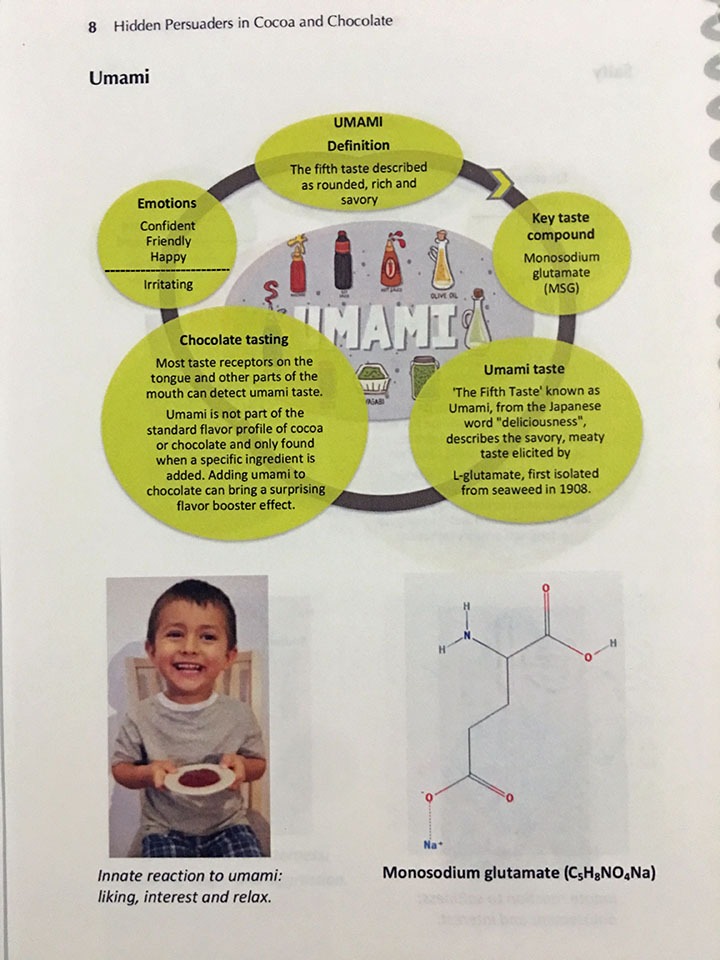 In addition to the basic flavor lexicon with extended descriptions – sensory impressions are described and chemicals responsible for specific flavors and sensory impressions are identified – and there are accompanying visualization tools that represent a few ways to think about the lexicon. These include flavor wheels – two flavor wheels were developed, one for use by sensory professionals and one for use by non–professionals – and radial pie charts.

While I am quite excited about the work that is represented in Hidden Persuaders, that excitement is tempered [chocolate pun – could. not. resist.] by an awareness that a good deal of work needs to be done to take the lexicon as it currently exists and turn it into something that can be used by non–sensory professionals.

As someone with a ~20 year career in high tech that includes being a named inventor on patents in information management software AND a ~20 year career in chocolate that has focused on critical analysis of chocolate and education, I see Hidden Persuaders as a foundation for achieving what has been done in coffee, beer, wine, and other beverages and foods.

I also see Barry–Callebaut as one of the few companies in the chocolate community with the resources to make it happen. Any tool that improves communication will benefit everyone. Not just Big Chocolate but also the community of small specialty chocolate makers.

I spent the introduction to this piece talking about how some hardware and software introduced in 1987, coupled with social media, transformed photography in a single generation. I see the same potential here.

Critically, Barry–Callebaut has not protected the underlying work represented by Hidden Persuaders by trademarks or patents or copyright. (The compilation represented by the book itself is copyrighted but that is the expression of the ideas, not the ideas themselves.)

This may be a controversial point of view, just as many were not happy with me that I did not immediately dismiss Ruby chocolate as a gimmick, or think that I am a sell out or traitor for “abandoning” craft chocolate.

What I want people to understand is that I bring to the discussion a much larger perspective gained over ~35 years thinking about the implications of applications of high tech and how to educate people and communicate about chocolate.

What is needed are translators, interpreters, and instructors to take the the huge potential that is represented by the Hidden Persuaders lexicon and turn that potential into tools that could have as profound an effect on chocolate as we’ve seen happen in photography. And within 5-10 years if done well. 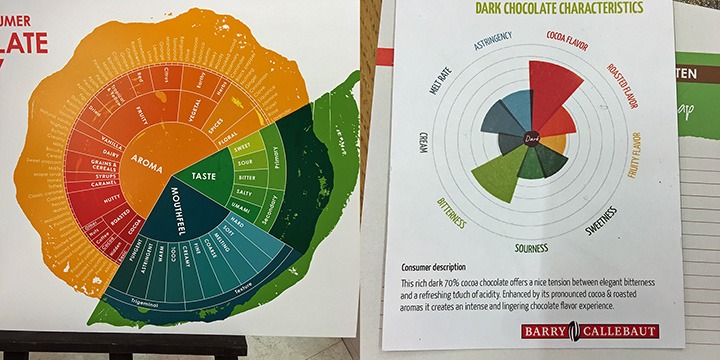 And it’s really cool, for me, that the epicenter of this realization was the Koeln Messe and the connection between the right-brain/tech and left-brain/chocolate aspects of my professional career.

@foodensity - I think one future that is implied here is finding ways to support multiple styles of visualization aimed at different user groups. I am certainly excited by that thought!

It looks an interesting concept. I like the different versions for professionals vs. consumers. I can't imagine the hard work required to assemble all the entries into the professional version. So impressive!
I also agree the tool created by Hazel Lee "Taste with Colour" is so straight and smart for the emotional part. I like her idea of a plain distribution of colors associated with flavors. I find it a more immediate process for the mainstream audience or, at least, helps give a good introduction.