Disclaimer: I have been an advisor to the organizers of Chocoa since the months leading up to the second edition.

In my role as an advisor and ambassador, I have seen Chocoa grow both in ambition and stature to the point where it is now – in my opinion and in the opinion of many others – the most interesting multi-disciplinary gathering in cocoa and chocolate in Europe, if not the world, especially for small chocolate makers, specialty cocoa growers, companies that serve those groups, and people who just plain love good chocolate.

Where ICCO (the International Cocoa Organization) and WCF (the World Cocoa Foundation) meetings are much larger in terms of participants, and for the time being economic and political impact, neither of those two organizations does a good job of serving the needs and interests of smaller makers and growers and they completely ignore the people who purchase the finished chocolate products that, in the end, pay everyone’s bills and generate profits for investors.

It is in those gaps – and they are huge – that Chocoa pursues its mission: Good Cocoa, Better Chocolate.

To serve communities as diverse as cocoa and chocolate, the ambitious 2020 Chocoa Conference Program comprised:

All over the course of five days. This year, all of the program events were sold out, or very nearly so, in advance.

Quickly outgrowing its initial location – the Maritime Museum in Amsterdam – Chocoa moved to the Beurs van Berlage, a historic building which housed a commodities exchange and in which cocoa was traded well into the 1970s. The Beurs is a beautiful building and is one of the two loveliest venues for holding a chocolate event I have participated in. (The other venue is also in Amsterdam – the Royal Tropical Institute.)

It is always a pleasure to return to Amsterdam. There is some very good food (Toscanini on Lindengracht and La Perla on the Tweede Tuindwarsstraat in the Jordaan; Patisserie Holtkamp on the Vijzelgracht for crispy hot croquettes and one of the best-looking pastry cases in Amsterdam), some great spots for beer (my favorite near the Beurs is Bierprooflokaal in De Wildeman on Kolksteeg, and some very tasty coffee (Caffé il Momento on the Singel and Hummingbird on the Spuistraat). My favorite chocolate shop/café in Amsterdam (Metropolitan Chocolates on the Warmoesstraat) is about a two-minute from the front door of the Beurs and the oldest continuously-operating jenever distillery and tasting room, Wynand Fockink, is not much farther and another do-not-miss tasting experience.

I have been involved with the Chocolate Makers Forum (CMF) from the very start, presenting and moderating during its first year when it was a one-day event. Since the second year, when it grew into a two-day program, I have been helping the organizers create the forum program, give presentations, and moderate some or all of the sessions each year.

One thing I like about working on Chocoa is that while we make mistakes, we rarely make the same mistake twice. The organizers listen to input from all involved and actively seek out advice from the broader Chocoa community on what and how to improve. The organization of the conference program has changed in format and focus every year, and CMF2020 was no exception. My personal favorite aspect of the CMF this year is that I did not have any moderating duties so I was able to spend more time visiting stands during the Trade Fair, something I had too-little time for in previous years, as well as attend several of the Plenary Conference sessions including the opening keynote.

This year the CMF was divided into four sessions, two on Thursday and two on Friday. The themes of the four sessions were:

More than 30 speakers presented during the CMF, again representing the depth and diversity of the audiences Chocoa serves. I was the keynote speaker for the Beyond the Bar session, which was moderated by Greg D'Alessandre of Dandelion Chocolate. There were presentations a) on the commercialization of cacao juice and b) cacao pulp, c) using single-origin cocoa butter in cosmetics, d) making products with chocolate at origin in Nigeria, e) making whole unfermented cocoa beans edible (and ¡tasty!), and f) making cacao fragrances.

One thing that is special about the Chocoa Trade Fair is that it takes place in Amsterdam – the largest  cocoa region in the world that is not an origin. More cocoa passes through the Port of Amsterdam each year than is grown all but a handful of cocoa-producing countries! For hundreds of years Amsterdam, The Netherlands, and more recently the Beurs van Berlage, have played a vital and central role in the global cocoa and chocolate industries and Chocoa taps that well of history and the modern-day roles they now play.

The Trade Fair attracts exhibitors and visitors from all links in the supply web – cocoa producers, chocolate-making and packaging equipment manufacturers, cocoa brokers, distributors, chocolate makers industrial and craft, bankers, insurance and logistics providers, software developers, government trade associations, and more. It is this depth and diversity, coupled with the breadth of international representation, that is one of Chocoa’s key differentiators, compared with, for example, the FCIA (Fine Chocolate Industry Association) in the United States.

Every year at Chocoa one of the main events is the Gala Dinner – perhaps the single most valuable networking event during all of Chocoa – in addition to being one of the tastiest. This year saw the collaboration of Executive Chef Franz Conde with award-winning Peruvian chef Jaime Pesaque, the owner of the highly regarded restaurant Mayta in Lima. 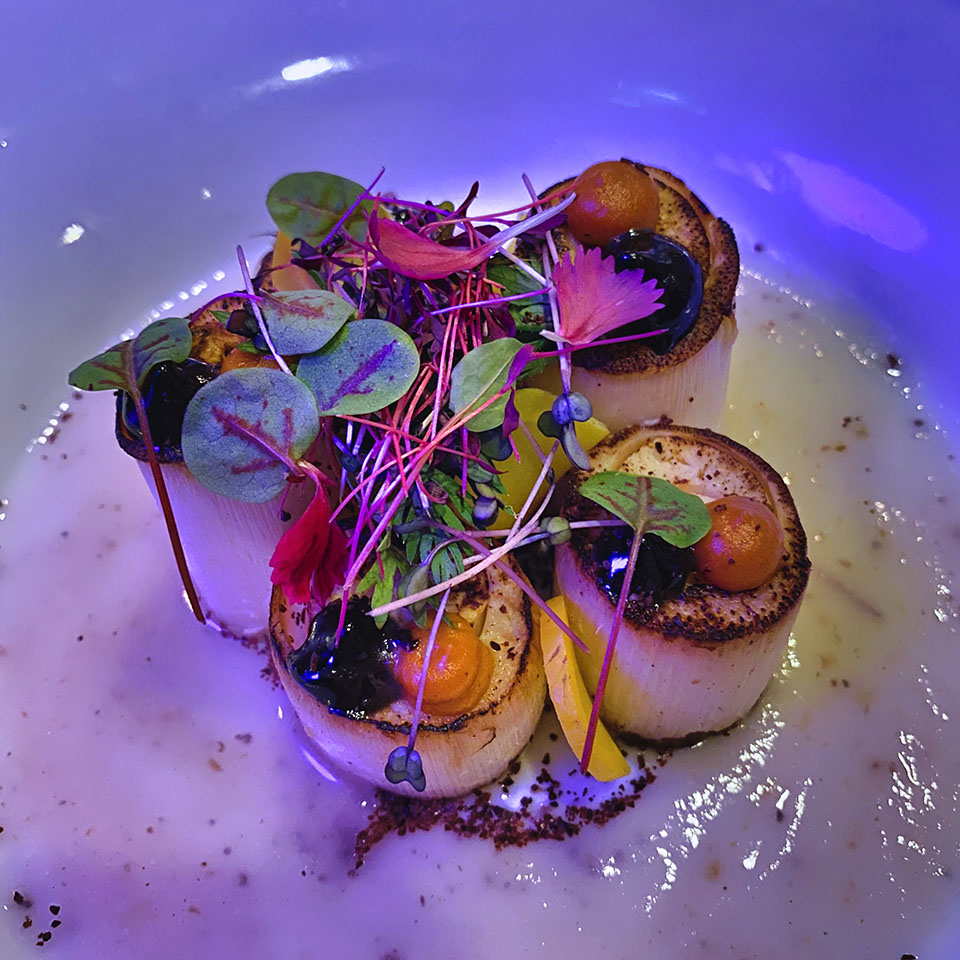 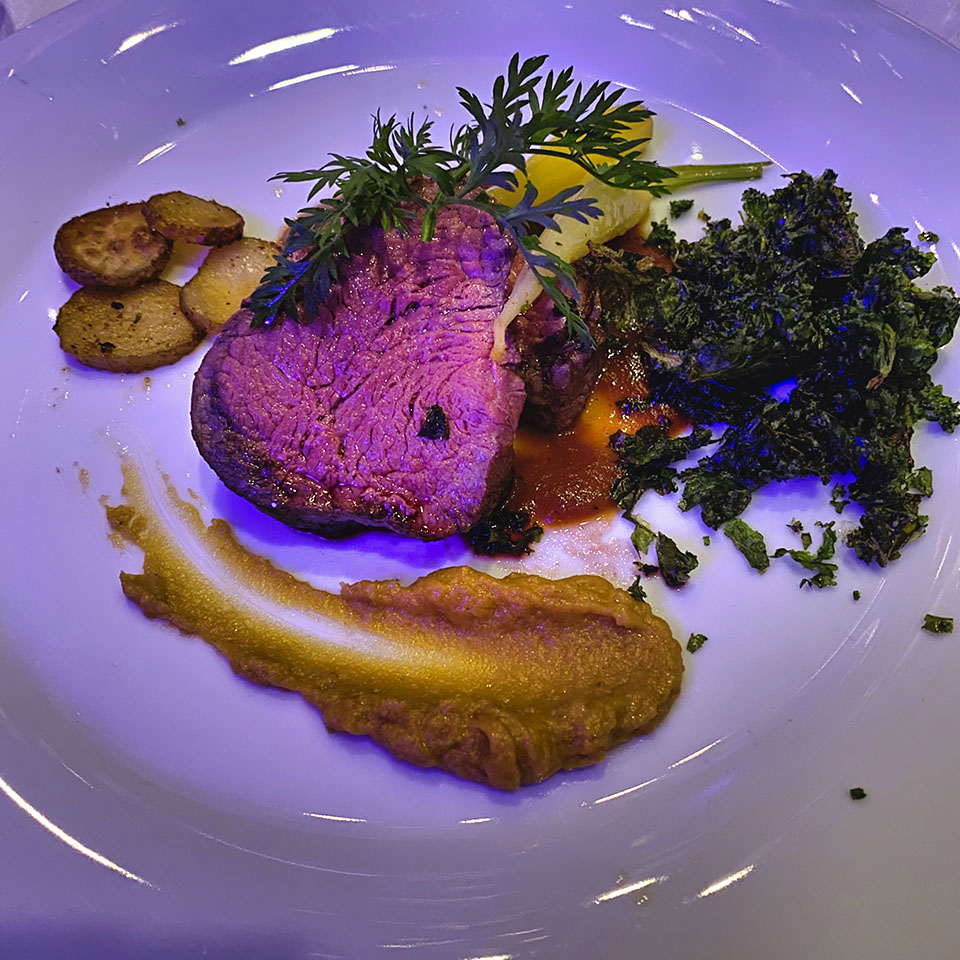 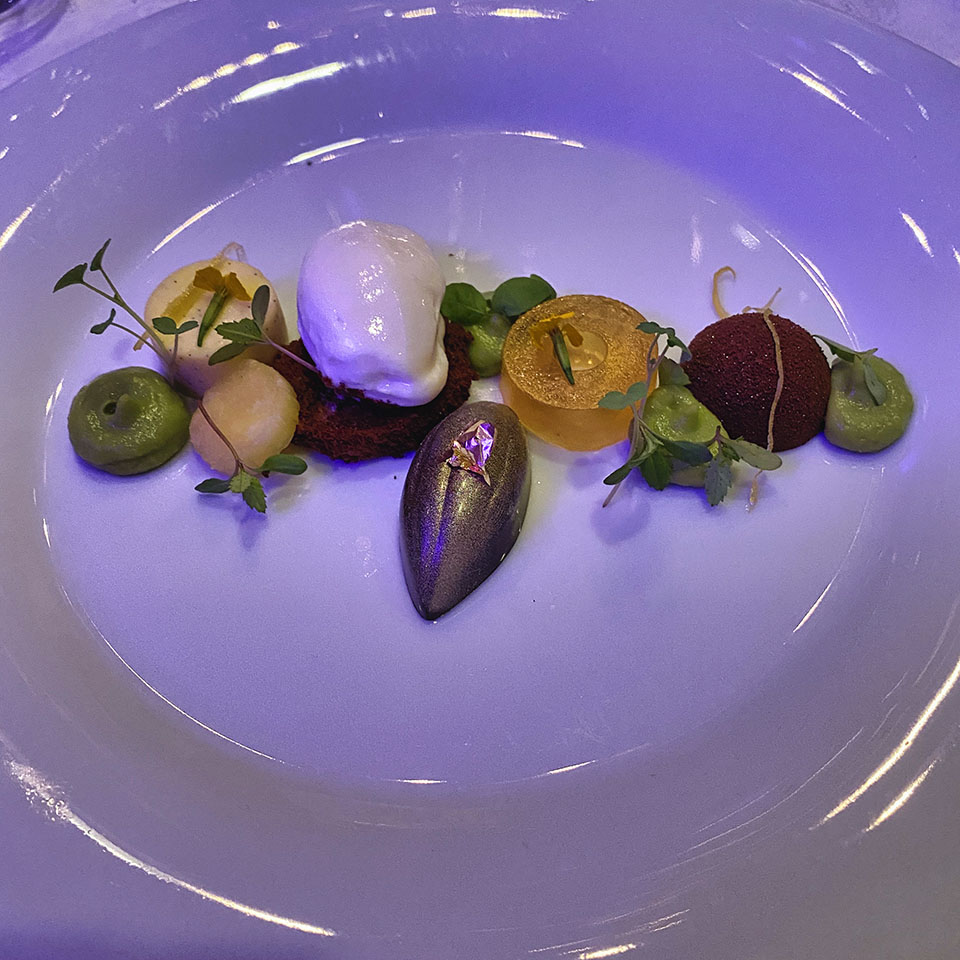 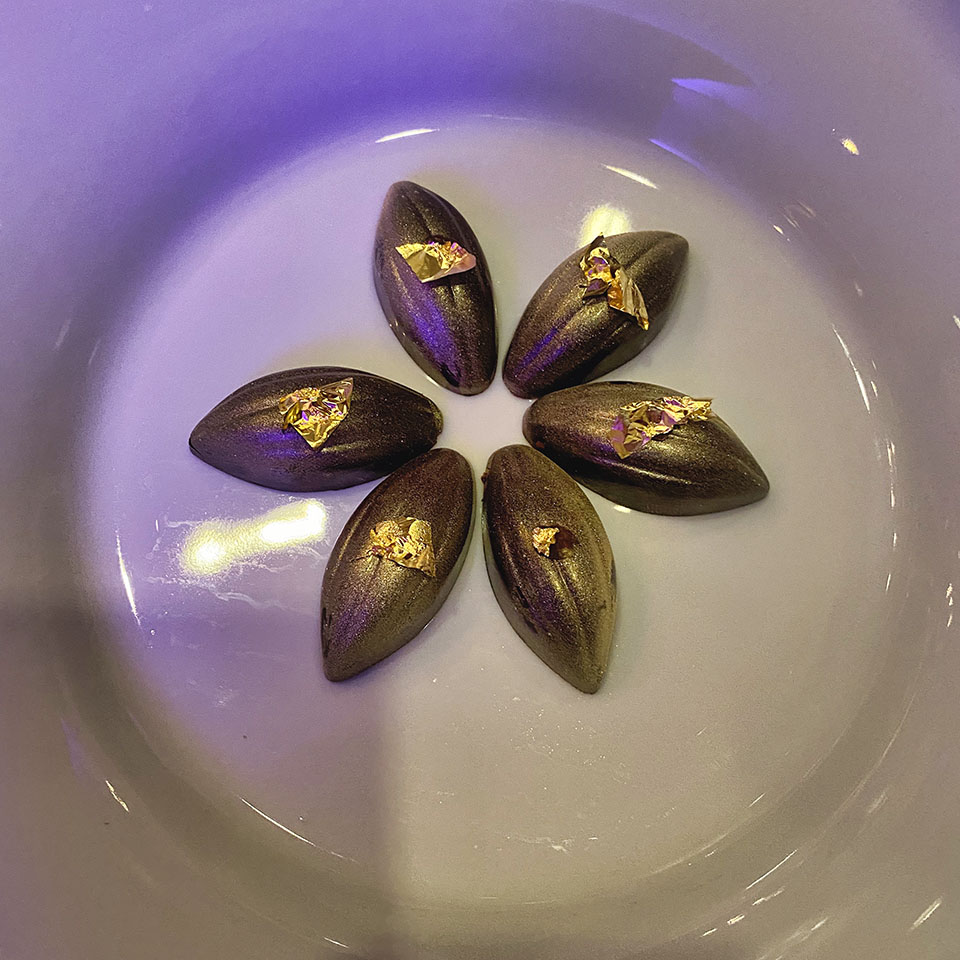 A special treat – when you know the chef!

Dessert was created by acclaimed Dutch pastry chef Hidde de Brabander and the highlight was the global public debut of Callebaut’s Wholefruit Bold (80%) dark chocolate (in the form of a decorated chocolate shell and a mousse) and a sorbet made from cacao fruit juice. Wholefruit chocolate is sweetened using sugar made from cacao juice and so has some of the flavors of fresh cacao pulp. It was also surprising to me to see how the taste of the chocolate has evolved since I attended the launch event last September, and I was told that the chocolate that is going to be released to the public is an even more evolved product. I am very interested in tasting the difference.

After three days of jam-packed morning-to-evening conference programs, Chocoa is just hitting its stride! This year, the consumer chocolate festival marked its best exhibitor numbers and public attendance figures to date, offering up samples of chocolate delights from over 100 different exhibiting companies hailing from more than 40 countries.

Who knows how many different chocolate products were available to sample? I would easily guess more than 500 but the number might easily be nearly double that, especially because of the presence of distributors representing many different brands.

I don’t know how many chocolates I tasted over the course of five days, but four stand out. (I can only find photos for three of them.)

One of the main themes of the Beyond the Bar session in the Chocolate Makers Forum was there there are many things that can be made from chocolate than bars. One stark example of this was on offer from Davide Appendino [link is to Insta account] from Turin. On display (and for tasting and purchase) were three single-origin gianduiotti. Davide does offers a number of single origin bars he makes in-house, but then goes a step further and creates single-origin gianduia from India, Venezuela, and the Dominican Republic. While obviously not the same experience as a solid chocolate bar, the differences in origin are obvious (in addition to being tasty) and represent a fun way to expose many chocolate lovers to chocolates made with cocoa beans from different origins by moving to where they are, not requiring them to move to where the chocolate is.

What is really fun about this Awards program is there are two judging panels – a professional jury and one consisting of visitors to the chocolate festival. For €1 they get to taste all five entries and rate them on a scale of 1-5 on five different attributes. The votes get tallied and the entry with the most votes is the Audience Favorite.

While I have been asked to judge in previous editions of the Cocoa Drink Awards, this year I was asked to be the head of the jury. This meant I could use the official forms as a guideline but was free to improvise. My approach, which I have used with great success as the head of the Confectionery jury at the Good Food Awards, relies not at all on numbers and entirely on the tasting and sensory experience of the other judges: Caroline Lubbers, co-founder of Chocoa; Mariana de la Rosa of Puro-Origen and representative of Chocolates El Rey in the Netherlands; and Franz Conde (who is from Venezuela), Executive Chef at the Amsterdam Hilton who oversaw the creation and execution of the Gala Dinner.

There were five entries, each a distinctly different take on a hot cocoa beverage. One (the eventual winner) was a take on a traditional European-style drinking chocolate. Another was much lighter and was based on the use of Philippine tableya used for making drinking chocolate. The judging was completely blind and none of the jury panel knew which entry was from which entrant nor did we know the origin of the beans (cocoa from five different countries was represented) used for an entry.

The winner, for the second year in a row, was Kees Raat of Metropolitan Chocolates with a very traditional take on hot chocolate, thickened with the addition of cocoa powder, which is how he makes it in his shop. In second place was Chocolate Tree from Scotland, and in third place was To'ak from Ecuador.

The competition judging was not without incident – there are always differences of opinion and questions about the process, and the organizers and jury learned some very important lessons that will be put into place for the 2021 Cocoa Drink Awards Most of the lessons will come in the form of better instructions for the entrants and some will aid the juries as they evaluate the entries.

The Cocoa Drink Awards was a tasty learning experience for me and I hope for the more than 900 visitors to Chocoa who were a part of the public jury.

TheChocolateWire now has has a YouTube channel featuring original videos and curated playlists on chocolate and cocoa-related topics.

Yes, Virginia, There is Such a Thing as White Chocolate

There is a persistent belief that white chocolate isn’t actually chocolate. It is. Really.