...Southwestern style. This blend of Native American, Spanish and American cuisines is popular. For my challenge, I decided to make a low sodium version of chili. Since I already had some pantry staples I thought for sure I had this one in the bag. Guess I just didn’t count on insidious salt inserting itself literally everywhere. Get more ideas to kick salt at Kitchology’s Eat.Better app.

Is it worth the lick of salt? 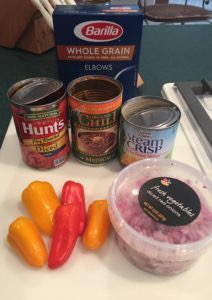 Let me digress for a moment. Looking closer at the earthy, hearty and, maybe even, hot flavors that dot Southwestern dishes, I learned the cuisine is distinguished by chiles. Some are sweet like the green ones and some are smoky like chipotles. When added to beans, black or red, corn and possibly tomatoes served with cheese, or tortillas you have a meal. (By the way, meat is also considered an important part of the meal, but for simplicity sake it is omitted from today’s discussion.)

Reflecting upon the complexity of these flavors I decided I needed to direct my shopping search toward cans labeled “southwestern” or “chili”. I figured the prepared versions would feature a kickin’ example of this unique style.

The good news is there is no shortage of these choices. The less than great news is a lot of them have a lot of salt. In fact, of all the cans labeled chili starter, chili with beans, chili beans, chili no beans, hot, medium and mild, not one contained less than 750 mg. sodium per 1 cup serving. Recall, nationally we’re asked to consume less than 2,300 mg daily.

Gulping hard, I decided to expand my hunt to include organic and higher and lower priced low salt preparations too. Concerned I’d come up short on taste, I also armed myself with heat and sweet. I picked up fire fueled tomatoes and steam crisp niblets. 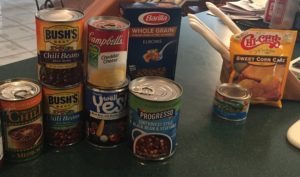 After testing several different canned food combos I found my lunch time winner. I chose a low sodium prepared version that offers texture via tofu. It stands fine on its own without any embellishment. However, since the nature of this post is is about combos, I did add the fired diced tomatoes and sweet kernel corn to the mix. Since I still craved freshness, I also added fresh onion and sweet mini peppers. If you’re looking for a serving suggestion, a 5 mg. sodium corn tortilla (other versions contain a lot more) or a bed of whole grain pasta would both work well. Another nice way to complement this meal would be with some green chili laced corned muffins.

It is possible to enjoy a satisfying low sodium meal made up from mostly, or all, canned food. Do note, however, accurate label reading is key to success with this quest. Sometimes, we can get tripped up even when we think we understand a label. Don’t be fooled by can sizes. Read for the portion size when comparing contents.

What comes to mind when you think of Southwestern #cannedfood combos? Pass along your thoughts @Kitchology and @Kitchenchick123 so we can share them.